How To: Make a Burlap Banner 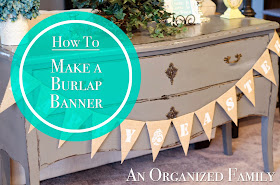 I am helping to host a baby shower for my cousin this Saturday and the shower is going to be at my house.  This is her second baby, but a different gender, and so we are doing a small shower for her with just family.  The shower is going to have a modern country theme, so I wanted to make a Burlap Banner for it.  So, while I was making one for her shower, I thought I would make one for Easter as well!

What You Will Need 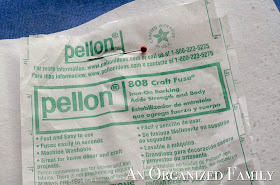 Lay out your burlap and the craft fuse over top of it.  Make sure to follow the directions and put the shiny side down. 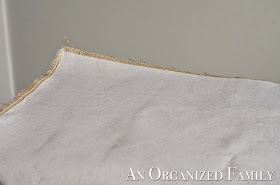 Using a hot iron, iron the craft fuse onto the burlap.  This will make the burlap stiffer and keep it from fraying. 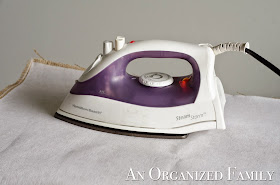 Lay the burlap out on a flat surface so you can begin tracing your triangles.  You can download my template or make your own. 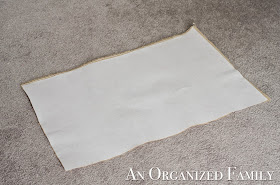 Layout your triangle template and trace with a marker or pencil.  Alternate the way the triangle faces to maximize your space. 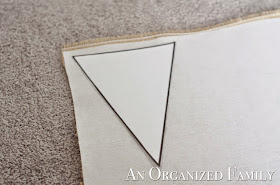 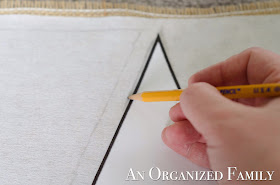 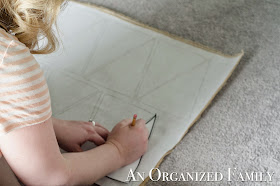 Cut out each triangle with a pair of scissors.  You don't want to use your good fabric scissors for this. 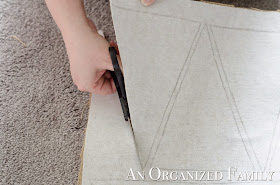 Now you should have all of your triangles cut out.  I was able to do 16 triangles on about a 24x36 inch piece. 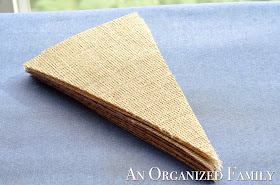 Next you will need to stencil on your letters.  You can either purchase stencils at the craft store, or I decided to make my own with my Silhouette.  If you decide to make your own, you will need some Clear Craft Plastic, which is what I used, or you can try to use Silhouette Stencil Material. The Silhouette brand has an adhesive backing, which I read online was quite sticky and sometimes left a residue.  I didn't want to chance that, so that is why I purchased just the Clear Craft Plastic, which worked great.

In your Silhouette Design Studio, type out what letters you would like to stencil on your banner.  Pay particular attention to the font.  For a stencil, you can't have any letters that have floating holes.  Every piece needs to be independent (ask me how I know this!)  On my second round, I chose the font "Stencil" which worked really well. 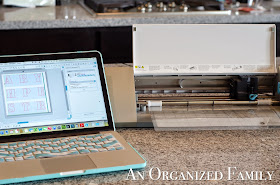 To find the right settings for cutting, you can choose the Stencil Material (Silhouette brand) and then make a few changes.  These were the settings I found worked best after making a few test cuts. 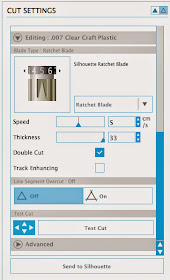 Pop out all of the pieces of your stencil and then cut them into individual stencils using either scissors or a paper trimmer. 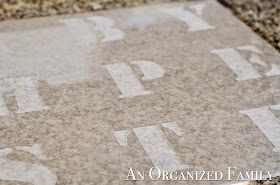 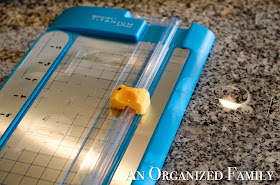 Besides letters, I also wanted an Easter Egg in between my two words.  I found this cute Easter Egg Swirls in the Silhouette Design Store for 99 cents and downloaded directly into the Design Studio.  I had to alter it to make it work as a stencil by removing the outermost edge.  To do that, right click on the image, click on Ungroup, then click on the outermost edge and hit delete.

Using the same cut settings as before, I cut out the egg with my Silhouette and then cut it down into its own stencil.

To make sure all the letters were placed evenly, I measured 2 inches from the top of the letter to the top edge of the burlap and then used painters tape to secure the stencil in place. 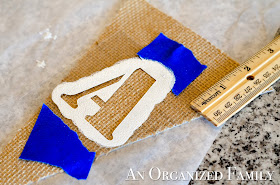 Using a stencil sponge brush, tap the craft paint on top of the stencil.  You will want to coat the burlap pretty thoroughly. 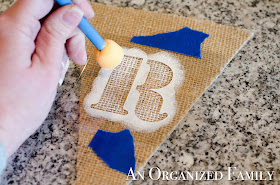 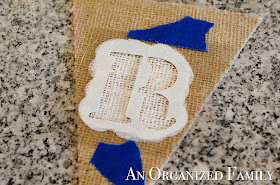 Once you have painted the burlap to your satisfaction, carefully remove the stencil and set it off to dry.  I found that my paint leaked through, so I made sure to put something under when I was painting and where I set them to dry.  Luckily, craft paint is water based and fairly easy to remove if needed. 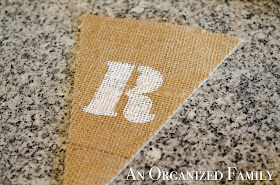 When your paint is dry, turn down the top edge about a half an inch and press firmly to crease. 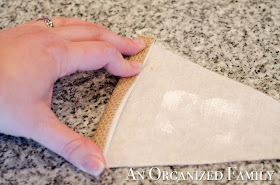 With scissors, snip off the edges that hang over. 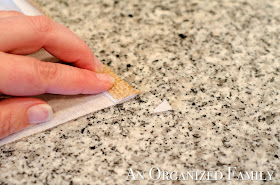 Now, get your twine and give yourself an extra couple of feet to hang the banner with on the end before gluing.  Make sure your end is going the right direction BEFORE you glue anything (again...ask me how I know this!) 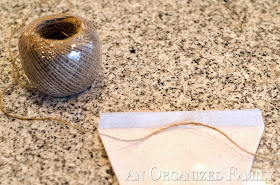 Place a small dab of hot glue on the two ends and one in the middle and then fold over on your crease to secure. 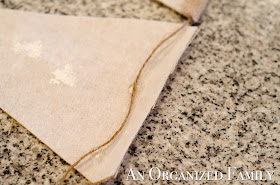 Repeat for each triangle.  Make sure you leave a few feet on both ends for hanging before you cut your twine. 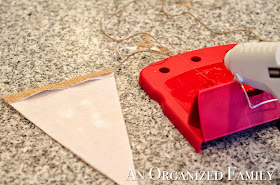 And that's it!  I love how it turned out!  The Happy Easter ended up being kind of long.  I wish I had just done Easter with the cute eggs on each end, but LIVE AND LEARN! 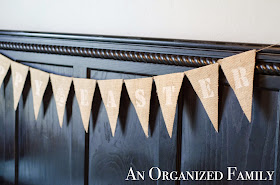 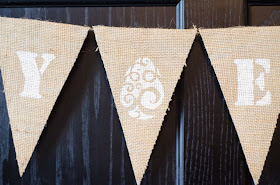 Like I said, I also made one for the baby shower, will I will show you in a few days!  Overall, I would say this craft was fairly easy.  It does have a lot of steps and making the stencils added some extra ones, but it was fun to try something new and I am very happy with how it turned out!

Have you made any burlap banners? Have any other pointers?  What fonts have you found are good for stencils?  Until next time!

Like this post? Be sure to comment and let me know! I love to hear from my readers! Also be sure to subscribe to my posts so you don't miss a single one!
at 4:00 AM